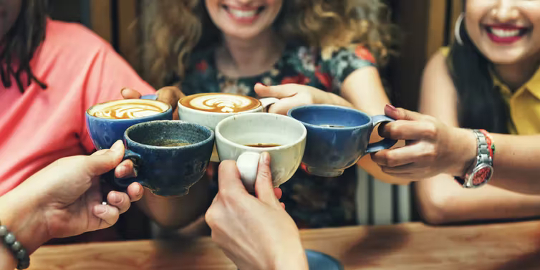 The chemical properties of coffee are what produce its waking-up effects. (Shutterstock)

Coffee is good for you. Or it’s not. Maybe it is, then it isn’t, then it is again. If you drink coffee, and follow the news, then perhaps you’ve noticed this pattern.

A recent study showed that coffee, even sweetened, was associated with health benefits. But other studies have come to more mixed conclusions.

What’s driving these pendulum swings in the health status of coffee? Like a good cup of coffee, the answer is complex, but seems to boil down to human nature and scientific practice.

Globally, we consume about two billion cups of coffee each day. That’s a lot of coffee, and many of those who imbibe want to know what that coffee is doing to us, in addition to waking us up.

As a species, we are often delusionally optimistic. We want the world to be better, maybe simpler, than it is. We squint at our morning cup through those same rosy glasses: We really want coffee to bring us health, not just a sunny disposition.

CBC News reports on the World Health Organization’s announcement that drinking coffee does not cause bladder cancer.

But is that likely? In drinking coffee, we’re ingesting a complex brew that includes literally thousands of chemicals, including one that evolved to dissuade herbivores from munching on the coffee plant: caffeine.

Coffee for the caffeine

Our morning kickstart comes from a plant toxin. The possible health benefits of coffee are generally attributed to other molecules in the brew, often antioxidants including polyphenols, a group that are found in substantial concentrations in coffee. But they, and other antioxidants, are also found in many plants like broccoli or blueberries, and in higher concentrations.

We drink coffee for the caffeine, not the antioxidants. The best we can realistically hope for is that we aren’t harming ourselves by drinking coffee. With any luck, coffee isn’t killing us nearly as quickly as other things that we’re doing to our bodies. I’m looking at you doughnuts, microwave popcorn and celebratory cigars.

The dynamic nature of science also drives our on-again, off-again medical love affair with coffee. Scientists like to study coffee almost as much as we like to drink it; there are almost three and a half million scientific articles focused on coffee (thanks Google Scholar). Even the number of cups we consume is surprisingly contentious, with many aspects being subject to scrutiny, study and debate.

The dizzying swings in coffee’s health status highlight a fundamental challenge in modern science. Research is an ongoing process, and our understanding of the world around us changes as we explore and learn. We question, examine and make decisions based on the best information we have. Those decisions can, and should, change as we get new information.

In 1981, a high profile New York Times opinion piece loudly proclaimed that our morning cup was driving us to an early grave. The writers wrung their hands as they swore off coffee and faced the grey reality of their post-coffee world. Their passionate convictions were driven by a then-recent study in which researchers clearly linked even moderate coffee consumption with a substantial rise in premature death.

Three years later the study was refuted by some of the same scientists, and the editors were, presumably, back in their coffee cups – if they had ever actually stepped away.

The initial study was well done, included more than 1,000 patients from almost a dozen hospitals and five reputable scientists. The results were clear and the conclusions seemed justified. But a follow-up study failed to replicate the, admittedly shocking, conclusions: the authors found no link between drinking coffee and premature death.

What went wrong? One thing may have been the researchers’ reliance on a common measure of statistical significance, the p value. The value was developed as a way to explore data, but is often treated as a magic bullet that identifies significant results.

But there simply isn’t a foolproof, objective or irrefutable way to identify or quantify the significance of a result. We can reach reasonable conclusions in which we have some kind of confidence, but that is about as good as it is going to get.

We need to question conclusions that seem to be too good to be true, like the idea that consuming a plant toxin could make us live longer, that only eating a fictional caveman diet will make us healthier, acting as though the COVID-19 pandemic is over, even in the face of daily evidence that it isn’t, will make it go away, or that simply ignoring massive fluctuations in weather will make global climate change disappear. Common sense can go a long way.

Is coffee good for you? Yes, in the sense that it will wake you up, brighten your mood, maybe even give you an excuse to get out of the house and chat with friends at a local coffee house.

Will drinking coffee make you healthier or help you live longer? Probably not. Sure, the antioxidants in our morning cup could actually be helping our bodies, but there are far better ways to boost your antioxidant intake.

So, wake up with a strong cup of coffee, but stay healthy with a complex and varied diet. by Thomas Merritt
You’re reading this with a cup of coffee in your hand, aren’t you? Coffee is the most popular drink… Is Coffee Good For You? It's Complicated!

by Thomas Merritt
You’re reading this with a cup of coffee in your hand, aren’t you? Coffee is the most popular drink… by Richard Hoffman
In countries such as the UK, US and Canada, ultra-processed foods now account for 50% or more of… Can You Safely Reheat Food More Than Once? How Diet Can Influence Mood, Behavior And More

by Monica Dus
During the long seafaring voyages of the 15th and 16th centuries, a period known as the Age of… by Anistatia Renard Miller
We all have our favourite summer cold drinks, from fruity British favourites like a cup of…

by Kathleen Frydl
The United States may regard itself as a “leader of the free world,” but an index of development…