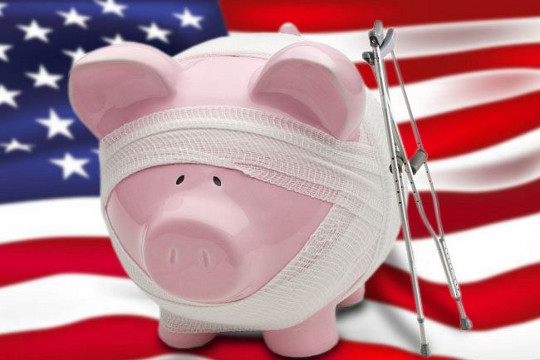 The dramatic decline of the once-great U.S. economy has important lessons for Australia and the world, as Alan Austin reports.

Americans seeking wisdom about the state of their economy will gain little insight from mainstream economics writers. They are like detectives called to investigate an assault. They note boot prints in the garden, the broken living room window and the smell of gunpowder. But they fail to observe the three dead bodies.

These are the cadavers:

One. America’s budget deficit last year was a staggering U.S.$2,723.8 billion (AU$4.157 billion). That’s nearly three trillion dollars. This amounts to 16.7% of gross domestic product (GDP). That was the worst outcome in recorded American history and by far the worst deficit of all 36 developed member countries of the OECD which have reported 2021 results. (The next deepest deficit among major economies was Australia’s at 7.8% of GDP.)

This is the first time the USA has been at the bottom of this global table. 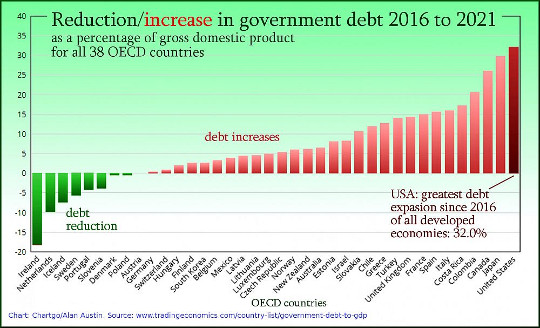 Three. The U.S. economy is in a technical recession, alone among all 38 OECD members. GDP declined in this year’s first quarter by 1.6%, and by 0.6% in the second quarter. No other developed economy has recorded two consecutive negative quarters this year. Again, this is a first since records have been kept.

The cause of the demise

All the clues point to one culprit. Tax revenues plummeted in 2018 and thereafter following the bizarre decision in December 2017 to slash the corporate tax rate from 35% to 21%, and cut the top income tax rate from 39.6 to 37%.

Trumpist Republicans asserted this would increase revenue and improve the economy. They were wrong. Total revenue fell far below spending, the budget deficit blew out badly and debt surged.

With corporate profits now more than double 2007 levels, the profitable companies are now contributing about half the share of their profits they were paying before the GFC.

Conservative American business lobbyist Cato Institute constantly spruiks tax cuts. In March, it tried to assert that Donald Trump’s 2017 tax cuts had been good for the economy with this chart: 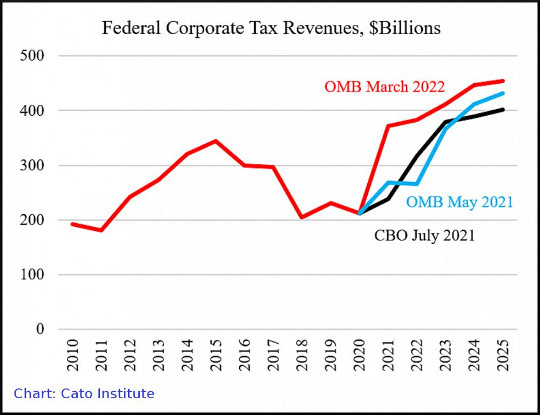 The red line shows actual corporate tax receipts as recorded by the OMB. The blue line shows OMB forecasts made in May last year and the black line shows forecasts by the Congressional Budget Office (CBO) in July last year.

The article claimed that ‘the strength of corporate tax revenues is impressive as reflected in the upward shift in the baseline’. It argued that because the real red line was higher than the imaginary blue and black lines, the tax cuts must have been effective.

So IA can. See green line on the chart below. That is the best estimate of the revenue that would have accrued had the rates not changed in 2017. The yellow shaded area is the total revenue lost to the U.S. Budget – and the American people – since the tax cuts. The quantum is at least $430 billion (AU$655 billion) over the years 2018 to 2022. This is increasing each year. 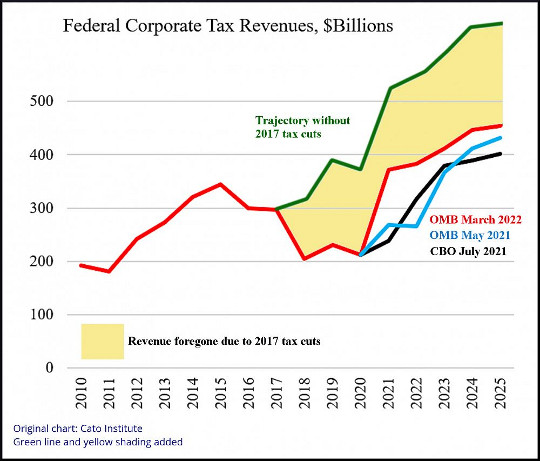 The cost to ordinary Americans

Much of this loss of revenue from company profits in 2018 was made up by tax hikes on individuals and by hefty increases in excise taxes and social insurance receipts. But total revenue that year increased only by 0.41%. That was nowhere near enough to cover government spending, which increased by 3.2%.

Naturally, shareholders of profitable corporations are delighted with this arrangement. Maybe this is why the media corporations are reluctant to expose it. But the current cost to individual taxpayers is substantial.

Trumpist Republicans and their allies are calling for spending cuts in order to balance the Federal Budget. They have not done their sums.

The budget deficit this year is forecast at -$1,414.9 billion (AU-$2,156 billion). That will not be eliminated even if Congress slashed the budgets of the departments of Defense, Education, Energy, State and Housing and Urban Development — entirely.

The only pathway to a balanced budget is via substantial increases to taxes on companies and the top end. This will require restoring the corporate rate to at least 35% and, preferably, higher.

Lessons for the watching world

Independent Australia has long argued that adequate contributions from company profits are essential for a healthy economy. The findings of this coronial inquiry confirm that.

Other countries to have increased their company tax rates in recent years and reaped the benefits include Taiwan, South Korea, Latvia, Germany, Slovenia, Ecuador, Chile and Columbia.

Meanwhile, in America, those three corpses are still lying on the living room floor.

This article originally appeared on IndependentAustralia.net

Alan Austin is an Independent Australia columnist and freelance journalist. You can follow him on Twitter @alanaustin001.

Capital in the Twenty-First Century
by Thomas Piketty. (Translated by Arthur Goldhammer)

In Capital in the Twenty-First Century, Thomas Piketty analyzes a unique collection of data from twenty countries, ranging as far back as the eighteenth century, to uncover key economic and social patterns. But economic trends are not acts of God. Political action has curbed dangerous inequalities in the past, says Thomas Piketty, and may do so again. A work of extraordinary ambition, originality, and rigor, Capital in the Twenty-First Century reorients our understanding of economic history and confronts us with sobering lessons for today. His findings will transform debate and set the agenda for the next generation of thought about wealth and inequality.

Nature's Fortune: How Business and Society Thrive by Investing in Nature
by Mark R. Tercek and Jonathan S. Adams.

What is nature worth? The answer to this question—which traditionally has been framed in environmental terms—is revolutionizing the way we do business. In Nature’s Fortune, Mark Tercek, CEO of The Nature Conservancy and former investment banker, and science writer Jonathan Adams argue that nature is not only the foundation of human well-being, but also the smartest commercial investment any business or government can make. The forests, floodplains, and oyster reefs often seen simply as raw materials or as obstacles to be cleared in the name of progress are, in fact as important to our future prosperity as technology or law or business innovation. Nature’s Fortune offers an essential guide to the world’s economic—and environmental—well-being.

Beyond Outrage: What has gone wrong with our economy and our democracy, and how to fix it -- by Robert B. Reich

In this timely book, Robert B. Reich argues that nothing good happens in Washington unless citizens are energized and organized to make sure Washington acts in the public good. The first step is to see the big picture. Beyond Outrage connects the dots, showing why the increasing share of income and wealth going to the top has hobbled jobs and growth for everyone else, undermining our democracy; caused Americans to become increasingly cynical about public life; and turned many Americans against one another. He also explains why the proposals of the “regressive right” are dead wrong and provides a clear roadmap of what must be done instead. Here’s a plan for action for everyone who cares about the future of America.

Click here for more info or to order this book on Amazon.

This Changes Everything: Occupy Wall Street and the 99% Movement
by Sarah van Gelder and staff of YES! Magazine.

This Changes Everything shows how the Occupy movement is shifting the way people view themselves and the world, the kind of society they believe is possible, and their own involvement in creating a society that works for the 99% rather than just the 1%. Attempts to pigeonhole this decentralized, fast-evolving movement have led to confusion and misperception. In this volume, the editors of YES! Magazine bring together voices from inside and outside the protests to convey the issues, possibilities, and personalities associated with the Occupy Wall Street movement. This book features contributions from Naomi Klein, David Korten, Rebecca Solnit, Ralph Nader, and others, as well as Occupy activists who were there from the beginning. How Businesses Can Walk the Talk on Social and Economic Challenges Visualizing A New Economy and a New Way of Living

by Eileen Workman
A new economic model would need to be win/win, far different from the win/lose paradigm under which… Why Clean, Affordable Water Should Not Be In The Hands Of Private Companies

by Kate Bayliss
An extremely dry July has led to drought status being declared in many areas, while 3 billion…